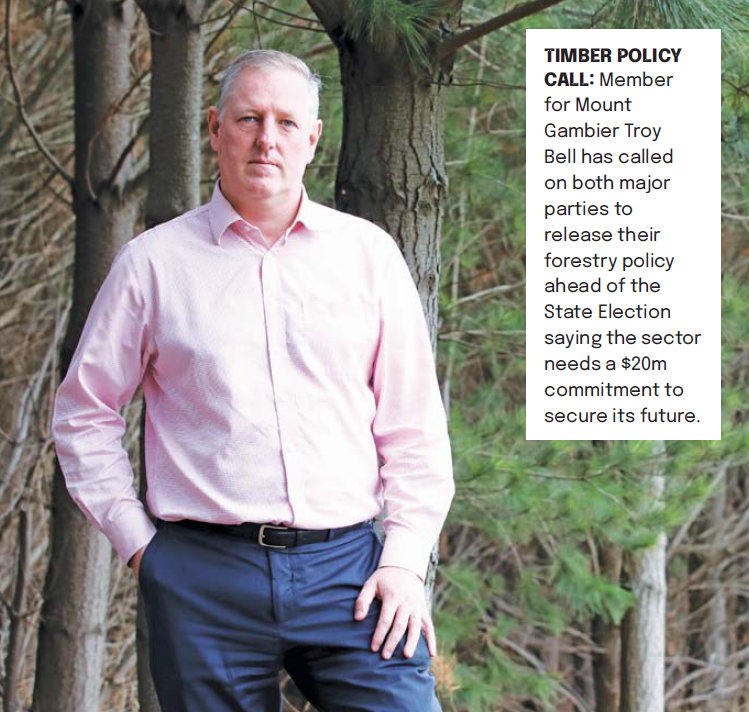 Published by The SE Voice

With the election less than three weeks away, the Independent MP said a funding commitment and plans for the forestry sector, one of the region's largest employers, was vital.

"Forestry is one of the most important industries within our region and state, employing more than 7000 people, injecting $1.5b into the economy and providing 5.8 million tonnes of carbon sequestration to support our environment," he said.

"It is important before the next state election, people understand what the policies of both major parties are in regard to this vital sector which has a significant role to play in meeting growing domestic and global fibre consumption."

The Independent MP said demand for locally grown fibre was set to quadruple by 2050.

"Research by the Green Triangle Forest Industries Hub shows an additional 1.6 million cubic metres will be required to meet local demand over the next decade, which means new trees need to be planted now to sustain this booming market and support future jobs," he said.

"Mount Gambier is in a unique position to contain the full breadth of the supply chain from seedling to sawmill and must be supported by sustainable policy solutions to further build its global reputation as Australia's 'fibre bowl'.

" Mr Bell said his Future Mount Gambier and Districts plan had identified a $20m dollar investment required over the next four years, including:

Fire Protection - supporting the Green Triangle Fire Alliance to invest in new innovations to protect the estate and broader community;

Training and development - supporting stable long-term employment and building skills for the future;

Mr Bell said the community deserved transparency from both major parties about the future of the sector.

"Both major parties must be open and transparent with the Electorate of Mount Gambier and highlight what commitment and investment it will make to support this vital industry to secure its long-term prosperity," he said.