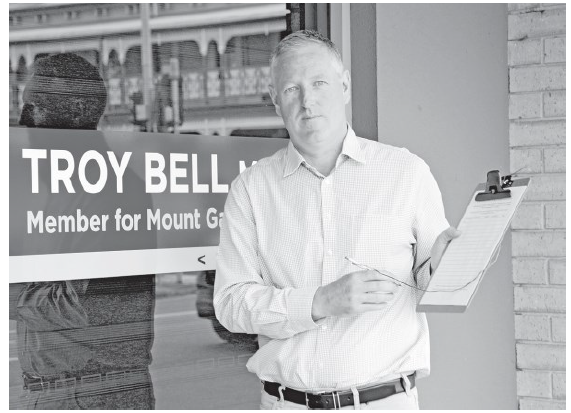 SNAPPER REVERSE: Member for Mount Gambier Troy Bell has launched a petition to axe the State Government’s new control measures for snapper fishing, saying it will have detrimental effects on recreational anglers and coastal communities.

Just 64 Mount Gambier fishers will be able to catch snapper this year following the random draw for South
Australia’s first recreational fishing ballot. More than 3600 amateur anglers applied for the snapper lottery across the state, with 16pc of applicants receiving five snapper tags when the season opens on February 1.

Member for Mount Gambier Troy Bell has called on the State Government to scrap strict new control measures for recreational snapper fishing, slamming the new system as an unfair and flawed model.
Mr Bell has started a petition to overturn the tagged system, which will provide just 303 amateur anglers from the Limestone Coast, Murray Bridge and Kangaroo Island areas a limited number of tags to catch snapper in South East waters.

The independent MP expressed shock the Snapper Management Advisory Committee - an independent body which recommended the management system - failed to consider the self-managing system of the region’s open waters.

Mr Bell said the strict controls would significantly impact coastal communities. “It beggars belief the people responsible for recommending this model would not understand that our snapper stocks in the South East come from Victoria,” he said. “A tagged system will have no effect on snapper stock, will penalise local recreational fishermen and potentially affect tourism numbers in our coastal towns.

“All this government is doing with this policy is driving tourism and recreational anglers over to Victoria.”
Mr Bell urged for a review on the significant variation between South Australian and Victorian snapper size and bag limits.

“In Victoria the size limit for snapper is 28cm, which is smaller than South Australia at 38cm.

“The bag limit in Victoria is 10 snapper per day, compared to the South Australian system of five snapper for the entire season limited to 606 ‘lucky’ anglers.

“I just think this is nonsense.

“To my mind, this is an unfair and unworkable system and needs to be urgently reversed.” Mr Bell’s comments follow criticism across the recreational sector, with anglers across the region slamming the
snapper tag system.

Last week, Port MacDonnell Professional Fishermen’s Association members voted to write to the State Government seeking to remove the restrictions or ban snapper fishing for three years in line with the rest of the state.

“Fisheries scientists tell us it is sustainable to fish for snapper in the South East, however, we must not see a repeat of what is occurring in our gulf waters and west coast and that is why controlled fishing will be allowed this year outside the summer spawning closure period,” he said.

Mr Bell urged community members to sign the petition to axe the snapper system, which he will table in Parliament when it resumes next month.

The petition is located at Mr Bell’s office, Spot On Fishing Tackle, The Rocks General Store and Periwinkles Café at Port MacDonnell.