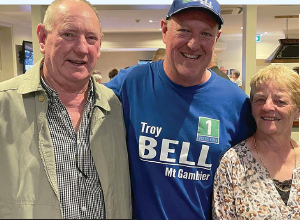 Published by: The SE Voice
By: Lechelle Earl

Independent Member for Mount Gambier Troy I Bell believes the Blue Lake city is set to receive "transformative" funding after Labor swept to power in South Australia at the State Election.

Mr Bell, who was re-elected for a third term, has vowed to work with new Labor Premier Peter Malinauskas to deliver $100m in pre-election commitments for the region.

In the lead up to the election, Mr Malinauskas pledged to upgrade both the Mount Gambier and Naracoorte hospitals, allocate an additional 24 paramedics and ambulance officers to the Limestone Coast, create six more mental health beds at Mount Gambier Hospital, increase drug and alcohol support funding, build a forestry Centre for Excellence and a technical college in Mount Gambier, upgrade the city's TAFE campus, establish a Cross Border Commissioner and slash licensing fees for rock lobster fishers.

Independent Member for Mount Gambier receives top support From front page Despite political experts predicting a hung parliament which would require either major party to negotiate with independents including Mr Bell to form a minority government, Labor experienced a resounding win at the polls.

Mr Bell said he was looking forward to sitting down with Mr Malinauskas, who had committed to visiting Mount Gambier "within 72 hours of being elected".

"I think it is so exciting, our community really needs to take this opportunity and maximise it," he said.

"We have never seen a commitment of this size and certainly not in my lifetime.

"This is transformative for our community and the state's second largest city.

"Securing the money in some ways is the easy part, making sure it is rolled out effectively and getting maximum return on that is now our focus.

"I will be talking to him about the Housing for All initiative as well as investment in tourism to turn Mount Gambier into a destination and not just a drive through attraction," he said.

"To be a destination we need investment in infrastructure and product ... we want visitors to deposit their money into our economy.

"Tourism is the greatest opportunity we have got, it creates jobs and the money flows widely through all aspects of the community.

"They are the two things we will be really discussing as well as how to roll out the $100m-plus commitment that's been given." Mr Bell said he would also be encouraging Mr Malinauskas to locate the promised technical college at the city's TAFE campus, instead of at Mount Gambier High School.

"None of this will come as any surprise, I have been very open and honest . as to how we can improve on these commitments," he said.

"These are exciting times for our community.

"Going into the election I was very nervous only one side had committed to our community, the other one had not. I felt that I'd done everything I could to get the Liberal party to commit, even writing an open letter to Steven Marshall.

"But as an independent I will deliver everything that has been committed to our community.

"When we sit down we will have a clear and razor focus on Mount Gambier. I have spoken to other ministers in his cabinet already, I spent most of Sunday on the phone to a number of ministers and they are committed to working with me to deliver for our community as well." Securing the money in some ways is the easy part, making sure it is rolled out effectively and getting maximum return on that is now our focus.