Bell praised for ringing in change to 'outdated' law 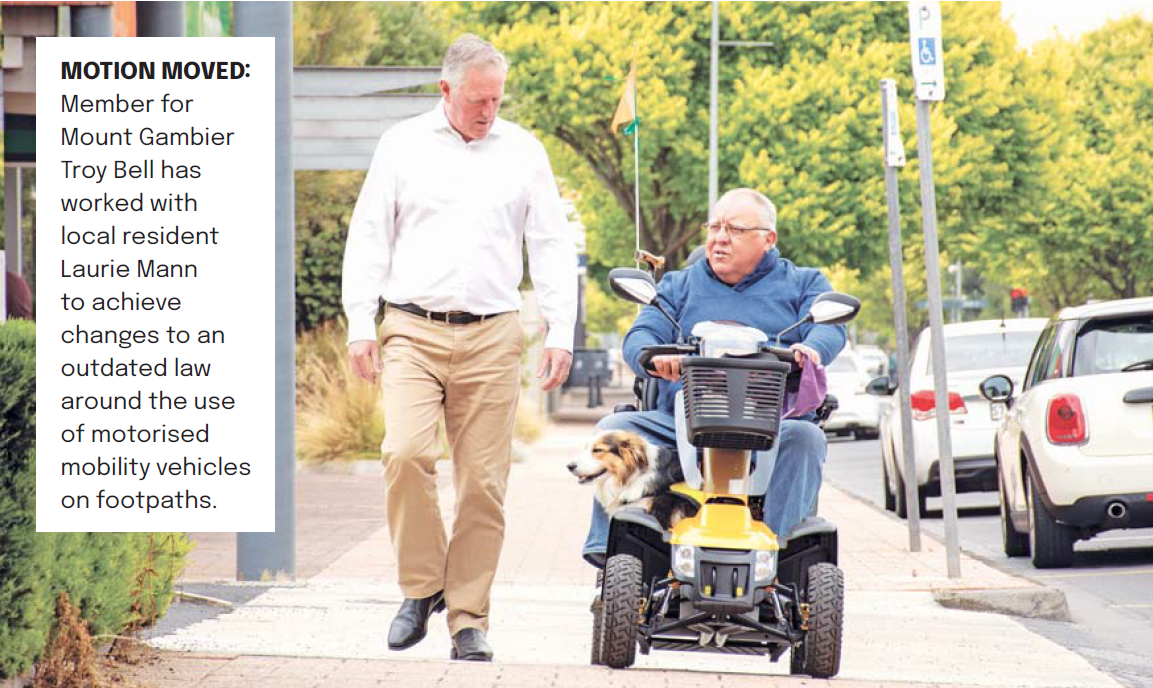 Published by The SE Voice

The South Australian RSL President has thanked Member for Mount Gambier Troy Bell for changing an outdated law around the use of motorised mobility vehicles on footpaths.

RSL State President Cheryl Cates said the law change, which increases the legal weight limit of the gophers and wheelchairs, was a job well done, not only for veterans, but for other disabled persons.

The change to the Road Traffic (Ancillary and Miscellaneous Provisions) Regulations 2014, increases the unladen mass limit of a motorised wheelchair being driven on a path from 110 kilograms to 170 kilograms.

Previously, South Australian road rules stated it was illegal to drive such a vehicle on a footpath, unless the wheelchair or gopher was under 110kgs.

With the average weight of a standard model tipping in at 120kgs, the Independent MP said it was an important change for the accessibility of Mount Gambier's streets and footpaths.

"Thank you to Laurie Mann who brought this to my attention and is a passionate advocate for veterans services," Mr Bell said.

"Every day Laurie travels many kilometres around Mount Gambier in his gopher with his assistance dog Indy so he has become a great advocate for accessibility at all levels.

"This change may be small, yet it's hugely important to those many people across South Australia who rely on motorised wheelchairs and gophers as their main mode of transport for daily life."

Mr Mann described the change as a great win, saying it was a further step towards Mount Gambier becoming a veteran-friendly community.

"This means a lot to me and maybe you have to walk in the shoes of a disabled person to understand it properly," he said.

"The average wheelchair is 120 kgs so this change is peace of mind knowing you can drive along safely within the law."

Mr Mann, who has used a scooter for five years due to service-related issues, said he averages around 20km a day on his scooter.

"There's more and more scooters getting around, so accessibility is a big issue for us,"

he said. "I'm working towards a veteran friendly community, which needs to be more accessible for all people."

Mr Bell said he welcomed local residents approaching him about issues they were concerned about.

"People are the eyes and ears of our community and often bring things to my attention that I do not know about and might be able to help advocate for," he said.