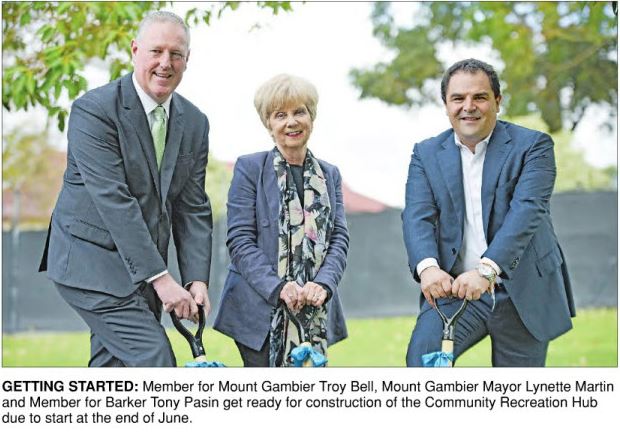 With shovels on-site, the ceremonial occasion marked the official start of construction, but major works are not expected to start until mid-year.

It is anticipated the construc tion phase will create 121 direct jobs, with another 21 direct ongoing jobs supported upon its completion.

The project was cemented after a landslide community vote late last year and funding support flowing from federal and state governments.

“A lot has already occurred in relation to this project in a relatively short space of time,” Ms Martin said.

“However, if I may speak on behalf of all those involved, the sheer volume of work undertaken to this point has been worth it.”

Mayor Martin highlighted the significant amount of work achieved by stakeholders, including across the three tiers of government, with the federal and state governments joining Grant District Council as financial backers of the project, providing $15m, $10m and $350,000 respectively.

“This event recognises the hard work and support shown by many stakeholders to get to this point,” Mayor Martin said.

“City Council is appreciative of all assistance provided throughout the process thus far as the collective ongoing commitment to the project has been incredibly important.”

Mayor Martin said council was “confident that when built” the facility would provide for the ongoing needs of the local community.

“The hub will serve to attract people to our city, provide employment and new business opportunities and make the city an even greater place in which to live, work and play.”

City Council, Architect DesignInc and Co-Op Studio have provided a preliminary project plan outlining timelines for the next stage of the project.

“You will not physically see works happening on site for a few months, but there is a lot going on in the background including development approvals, the start of soil and water testing, as well as the timber feasibility study,” Mayor Martin said.

The development will see existing infrastructure, including four netball courts, the Aquatic Centre’s two smaller pools, playground and a majority of the main building demolished.

The centre’s car park is also expected to be remodeled.

Mr Pasin spoke about his commitment to making the project a reality, years after it was raised while he served as a councillor.

“A part of me feels guilty that I could not get it done,” he said.

“I have righted that wrong and it will come, in two years I will swim with my daughters in an inside pool.

“The project is expected to increase employment opportunities within the region, generating a value add of $13.44m and increasing gross regional product by $38.41m,” he said.